I am so sorry for the delay in posting pictures. I have been pretty busy with the birth of our wee girls 7 Boston Terrier puppies. Check the cuties out here.

Back to the hair – enough puppy chat/excuses!

Here I am attempting to show you (in pictures) the spread, loss then regrowth of my hair over  a 2.5 year period. My Alopecia started as little spots on my chin back in November 2011. I thought it was just Alopecia Barbae and was still distressed- then it gradually spread and I shaved my head  in 2012- detailed here.

Where it all began – first ‘spotted’ in November 2011 and by the time it got this big – I was officially scared, depressed and stressed!! (March 2012):

Two spots of nothing.

Once my facial hair began to disappear – so did my hair: The first spots appeared/ hair dissapeared in July 2012. 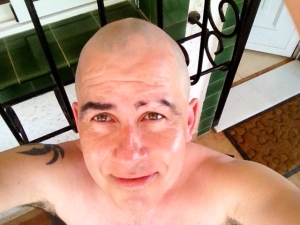 And here is an above head shot from when I first shaved: 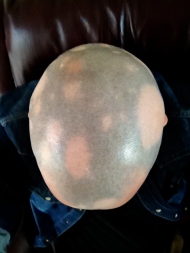 The solar system at the start

Is there any hope?

regrowth on my chin

I was hoping that the blonde would go black straight away – it didn’t.

My hair kept disappearing, too: here is a peek from the front and top (both taken in October 2012).

In the middle of my long alopecia episode 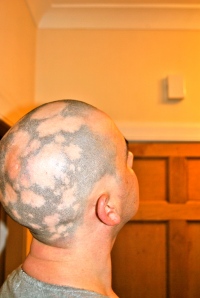 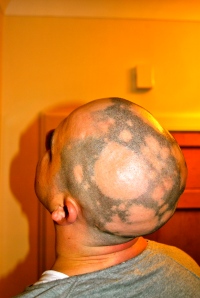 My eyelashes and  eyebrows started to disappear in November 2012. 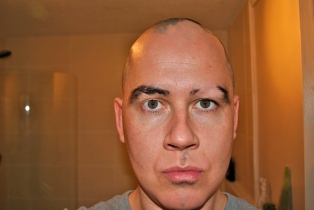 The eyebrows were a low ebb – but the loss of my eyelashes are what made me feel more alien – literally. It is a strange sensation not having eyelashes. People gave me a second look as they couldn’t quite put their finger on ‘what wasn’t right’.

I have detailed in another post my experiences trying to hide my missing eyebrows.

In case you can’t be bothered reading that post and want to see what my pencilled-in efforts looked like:

Pencilled-in eyebrow as of November 2012

I tried a number of  different ways to regrow my hair or at least hide the fact I had Alopecia, but found that a close shave (in the end) was best. At this point I was shaving my head daily and ignoring the ever-decreasing eyebrows and lashes. 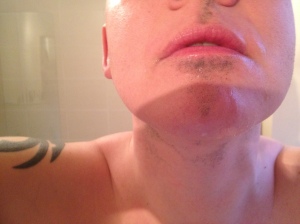 The patches started  to spread quicker – which made my Christmas elf hat less itchy as there wasn’t as much stubble to aggravate it.

As you can see from the images below most of the holes started to join up with each other especially the two big ones at the left hand side! I hate those two bad boys.

My head from the back 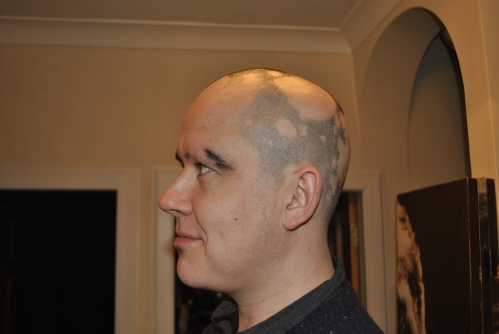 The left hand side of my head 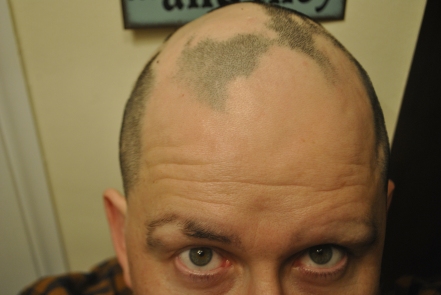 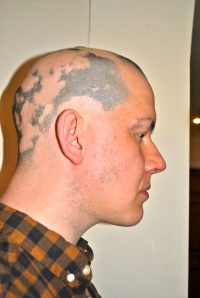 At this point I was still wearing beanie hats and pencilling in my missing chunks of eyebrow.

This was when I started realising that my eyebrows were more or less drawn on and I saw a picture and realised it was time to get rid of them.

Abi and the eyebrows 🙂

As you can see, they looked fake and I hadn’t realised until I saw the image above. So in March 2013 I shaved them off in the shower whilst shaving my head.

The middle image above makes me look strange and if you look closely you can see that it is because my right eye has hardly any top eyelashes and the left eye does. Not a great look but now I looked bald and possibly blonde?! Just another balding fair haired guy? That is what I told myself and started to walk about without hats – in certain places anyway.

The images below are from July 2013. As you can see there is hardly any hair left at all. 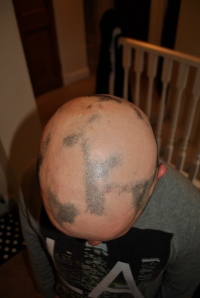 These images represent the worst my Alopecia got (It seems strange saying that but I don’t want to jinx anything). Then I stopped taking photos as much of my head as I actually forgot about it!

Here I am forgetting about it at a wedding in Valencia in September 2013.

Guests at a Valencian wedding

I decided to forget and what happened a month later??? The bastard started coming back!!! Exactly two years since I noticed it going!!!!! My previous post was correct! And there is hope for all you people out there who got this late and are hoping yours may come back in this famed two year period!!! 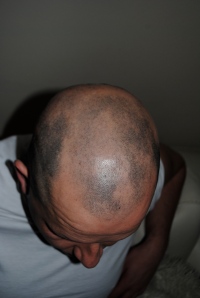 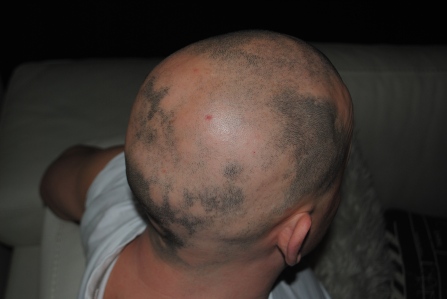 The year started well for me.

Here I am in January…. More progress on my regrowth in my next post……… 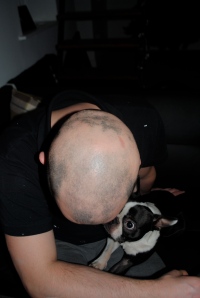 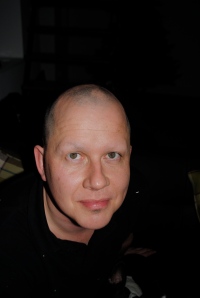